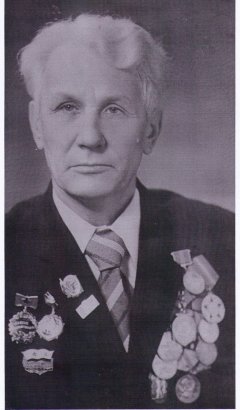 Participant of Great Patriotic war and Northern convoys Ivan Yakovlev was born in 1919 in the Ukraine, USSR. He was the 18th child in the family of a baker and a housewife. In 1930 the family moved to Kiev. Ivan recollected those days: “I finished the work school in Kiev and worked at famous plant “Arsenal”, but my dream was to become a pilot. I studied to be a flyer, clocked up a total of 48 hours in the air and had 15 jumps with a parachute. However, on being called into the Army, I got stationed in the Navy”.

In May 1939 he was sent to train in the Soviet Navy training squad in Murmansk region and later, in December 1939, was transferred to serve on board minelayer Murman.

Minelayer Murman was a former icebreaker modified into combat ship according to the needs of war time. It used to escort and meet the Allied convoys including PQ-17. The allies were usually met by minelayer near Bear or Dickson Islands and Franz Josef Archipelago. The Murman’s crew used to not only save people and cargo ships, but also put out of action several enemy’s u-boats and aircrafts.

Lyudmila Shipova, Ivan Yakovlev’s daughter, recollects: “Father told us that once the crew noticed a cargo ship standing among ices with a big roll. They launched a lifeboat and headed towards the ship, but reaching it they found nobody of the crewmembers onboard. It turned out, that the carrier was loaded with bags of flour and after the torpedoes had gone through the ship’s bottom the flour melted in the water leaving the ship afloat and letting the crew to leave it safely. The cargo ship was towed to the Matochkin Shar Strait. In total nine supply carriers and a tanker had been towed by Murman and two minesweepers to Archangel and Severodvinsk for repair.

Most of the times there was triumph when the strategic supplies were safely delivered to destination point protected by the convoy, but sometimes the sailors felt grievous loss when they saw ships going down and their fellow sailors being killed in enemy’s air strikes”.

Ivan Yakovlev recollected: “In 1943 our icebreaking steamship acting as auxiliary cruiser came under fire. On regaining consciousness I found myself in ice cold water side by side with two of my countrymen. “Swim up, - they said, - we shall go down together.” While I was swimming towards them, I lost consciousness and when I came round I was onboard a ship. That day looking in the mirror I found I became almost grey-haired”.

Barely alive he was pulled out of water with drag anchor. Being of a fighting nature, he did not go down due to a rage to live and bear fur-lined water-repellent clothes. That time only 8 members of his crew were picked up from water and saved, while the two his countrymen went down, hugging each other.

By the end of 1944 the Yakovlevs were expecting a child.

In the fall Ivan went on a sailing voyage. Due to the high risk of being detected by enemy’s u-boats, the crew could not give a signal of their existence for two months. Ivan’s wife was wrongly informed that her husband had died and the ship would not return to the port. After this report, her condition worsened, and she was taken to the hospital in critical condition. Lyudmila Shipova recollects: “Fortunately, on November 27, Murman arrived at the port. On hearing about the grave condition of his wife, father literally burst into the hospital, and my mother, having seen him safe and sound, gave birth to me safely, and lived for 93 years.”

Petty officer 1st class Ivan Yakovlev went through the Great Patriotic war, lost both his parents and a sister, and left military service only in 1946.

After the war, he lived in Severodvinsk and worked at the Northern Machine-Building Enterprise. For 10 years in a row in the summer, he headed the “Northern Artek” pioneer camp in the Arkhangelsk Region, on the Northern Dvina river. In 1975, he supervised the construction of the recreation center - the pioneer camp “North” in the Krimea, and later, in 1980, he was appointed its director.

His heart was open to both children and adults. Ivan Yakovlev was a talented organizer of schoolchildren's recreation. Taking care of children was for him not only a longtime job and occupation his heart was set on, but the point of his life itself. Ivan raised two daughters, five grandchildren, great-grandchildren.

We thank Lyudmila Shipova for the materials and information provided.

A group of sailors listening to a message from the mainland, 1944 г.