New Zealanders in the Northern convoys

Few New Zealanders served on the Northern convoys of WWII which are being referred to in New Zealand as Russian Arctic Convoys. They were men of British merchant ships carrying strategic cargoes to Russia, and Royal Navy vessels escorting them on their dangerous route.

One of the New Zealanders who took part in the convoys was Christchurch electrical engineer John Phillips. He joined the Royal Navy as a gunner in 1941 on his 21st birthday. He sailed to England for training as a navigator and served on a succession of Royal Navy ships. Mr. Phillips sailed to Russia on a Royal Navy destroyer in two convoys, including PQ 17, the most tragic convoy in the history of WWII.

He recalled the conditions were “hellish cold” with the sailors poorly clothed for the sub-zero temperatures. “We were fighting only a few hundred miles from the North Pole, with pack ice and icebergs all around us.”

On July 4th 1942 Convoy PQ-17 was ordered to scatter when the Admiralty thought the German fleet was going to attack it. Stripped of their naval protection the merchant ships were one by one decimated by U-boats and German dive bombers. Only 11 of the original 35 ships of the convoy got through to Russia.

Still, John Phillips was also on the next much more successful convoy, PQ-18.

His daughters say: "He never talked about the war, he buried it." However, he shared little bits with family to explain his deafness, his disappearance once a year to attend Anzac Day parades and his recurrent nightmares. These told of his distress at seeing the faces of men in the sea, British and Germans, after their ships had blown up. He spoke of enemy aircraft sweeping in low to attack the ships, and of watching a torpedo heading straight for his ship`s ammunition compartments, then slipping beneath. He spoke of shattered eardrums from the ship`s guns. "He hated war," his daughters say "He always said war is mad."

John Phillips returned home in fall of 1945. By the end of the war he had risen to the position of lieutenant (captain), and invited to captain a ship in the Pacific. However, he met and fell in love with his future wife, Merle. They married in 1947 and were a devoted couple for the rest of their lives. In 1997, when celebrating their Golden Wedding Anniversary, John and Merle won a ballot to represent New Zealand at a Buckingham Palace garden party to celebrate the 50th anniversary of the Queen and Duke of Edinburgh`s marriage.

John Phillips received a Russian medal every 10 years at special functions in Christchurch to commemorate the men's service, the last one in 2010 on the 65th anniversary of the end of WWII. 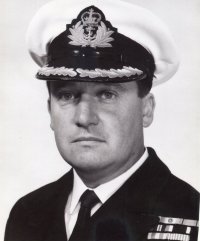 Unlike John Phillips, Bill Williams was a professional naval officer, who afterwards worked on the development of computer systems in New Zealand. He was also a founding trustee of a charitable body set up to help disabled people to use computer technology.

Mr. Williams` naval career began in 1942, when he signed on as an officer cadet after leaving high school. He trained at the Royal Naval College at Dartmouth, southern England. In 1943, aged 19 years, Bill Williams sailed with the Royal Navy as a Midshipman on the Northern convoys to Murmansk and Archangel and saw action against the German battleship Scharnhorst in December 1943.

Together with John Phillips, Bill Williams received medals from the Russian Embassy in Wellington, New Zealand, to acknowledge their wartime service.

We thank Frieda Looser, Judith Phillips and Bridget Williams for their cooperating and providing information.