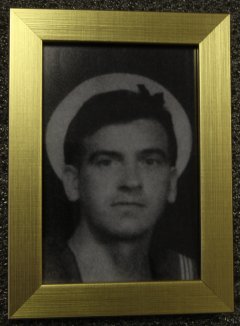 On January 31, 2020, the College of Admiral Makarov State University was visited by the Scottish delegation. As the part of the event the personal belongings of the Northern convoys veteran, 1st class sailor Charles Brodie, were donated to the future Memorial Museum. During the convoys Mr. Brodie served on the lightweight cruiser HMS Royalist.

Charles Brodie was born in 1915 in the city of Dundee, Scotland. In his youth he worked as a constructor and was fond of boxing. In the late 1930s, he joined the Royal Navy Volunteer Reserve, and was called up for service since 1939 till 1945.

Until 1943, Charles served on various ships in the Atlantic. In 1943, he was injured and spent several months in a military hospital in Aberdeen. After that he returned to service, this time on the light cruiser HMS Royalist that took part in escorting the Northern Convoys. During Charles’s service in 1944 the cruiser escorted convoys JW-58 and RA-58 and was part of the operation Tungsten, the Royal Navy air raid that targeted the German battleship Tirpitz. Operation Tungsten took place on April 3, 1944. The aircraft carriers escorted by the cruisers, struck the battleship in the Altenfjord causing significant losses to the Tirpitz crew. The loss of the British amounted to four aircrafts, nine pilots died.

It is noteworthy that the Scottish writer Alistair MacLean served on HMS Royalist at the same time with Charles Brodie. Later MacLean wrote the famous novel HMS Ulysses, which was based on his personal experience of service aboard HMS Royalist.

After the war, Charles returned to Dundee, where he worked as a librarian and art expert. According to the recollections of the veteran’s son, also Mr. Charles Brody, his father more than once warmly recalled meeting Russians in Murmansk and Arkhangel.

Photos of donated items can be found in our gallery.

We express our deep gratitude to the family of veteran Charles Brodie for the family relics donated to the Museum. We also thank Timofey Kunitsky, the representative of the Russian Ministry of Foreign Affairs, who personally handed them over to the International Centre.

Arctic Star medal awarded to Charles Brodie. The medal was specifically instituted by the UK in 2012 to award the veterans who served on the Northern (Arctic) convoys