The feat of the timber carrier "Izhora" 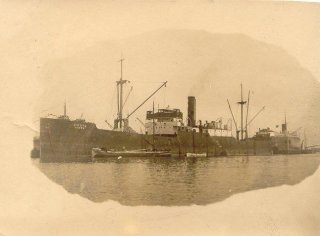 By the beginning of 1942, the war for Germany became protracted, and the cargo delivered by the Northern convoys largely compensated for the losses of military equipment suffered by the Red Army in the first months of the war.

On the orders from Hitler, the remaining heavy ships were transferred to Norway, the submarine forces and naval aviation was strengthened. In January 1942 the battleship Tirpitz arrived in Trondheim, a little later she was joined by heavy cruiser Admiral Scheer and in March by the heavy cruiser Admiral Hipper. The Germans began to conduct systematic operations on the Arctic sea communications.

Well-organized by that time undercover, air and radio intelligence reported that two convoys were preparing to leave at one and the same time. With a successful combination of circumstances, about three dozen ships could be sent to the bottom. Such damage, in fact, could have been equal to losses during a front-line strategic operation. The main striking force in the planned attack was Tirpitz, which then did not have a single worthy enemy in the North.

In late February ˗ early March 1942, Northern convoys PQ-12 and QP-8 left Reykjavik and Murmansk almost simultaneously. In the last one with a load of timber was the Izhora timber carrier. Izhora was a Soviet cargo steamer built in 1921 in Bristol (Great Britain) by Lloyd. It was a single-deck double-masted cargo-passenger ship, 98.76 meters long and deadweight about 2,815 tons, purchased by the USSR in 1934. By the beginning of the Second World War, Izhora was very shabby ship with worn-out engines.

The old slow-moving ship barely maintained its place in the convoy and soon, due to increased wind and engine malfunction, began to lag behind. According to the harsh laws of war, the convoy could not wait for Izhora, and after a while the ship was left alone.

On March 6, 1942, an operation by the German naval forces, codenamed “Sportpalast”, began against the Allied convoys of ships bound for the Soviet Union. Tirpitz left Trondheim, Norway, accompanied by the destroyers Friedrich Ihn, Herman Schöman and Z-25. First of all, they planned a sudden attack on the convoy PQ-12, protected by the light cruiser Kenya, at the same time trying to avoid the squadron of the British Admiral John Tovey, that was protecting the route from Iceland to Murmansk. The British submarine Seawolf detected the German ships, but almost immediately the contact was lost. From the message conveyed to her, it was not clear which ships left Trondheim and where they were going.

By midnight, the report was on the desk of the British commander of the Metropolitan Fleet, Admiral Sir John Tovey, who was at that time 100 miles from PQ-12 with a detachment of the battleships King George V and Duke of York, the heavy cruiser Renown, the aircraft carrier Victorious and a group of destroyers.

A squadron led by the battleship Tirpitz was supposed to covertly approach the intersection of the routes of two allied convoys, one of which (PQ-12) was on its route to Murmansk, and the second (QP-8) was heading to the shores of Iceland.

German intelligence worked well: the time and place of the rendezvous was calculated accurately. Without a doubt, Tirpitz would have gone to the convoys and staged a massacre, if not for meeting Izhora.

On March 7, 1942, at noon, the destroyer Z-25 noticed smoke ˗ it was the Soviet timber carrier (shipmaster V.I. Belov) lagging behind the convoy QP-8.

The logbook of the German destroyer, accompanying the battleship Tirpitz, dryly describes the discovery of Izhora:

“4.45 p.m. Excellent visibility. At 10 degrees, the destroyer Ihn discovered a strong smoke trail. This was immediately confirmed by the destroyers Schöman and Z-25. The destroyers are moving at full speed in this direction. Soon the funnel and two masts of a steamer heading west become visible”.

5.25 p.m. The steamer was ordered to stop the course and was prohibited from using radio communications. A warning shot was fired in front of it’s bow with a 37 mm projectile. The steamer stops moving. At the same time, the Germans were so sure that the worn-out steamer would not dare to violate this prohibition that they did not even turn on their radio jamming station, which could interfere with radio traffic. However, Izhora not only went on the air, warning everyone about the impending danger, but also opened fire from its only 37 mm gun.

Izhora did not have the slightest chance of fighting off, there was nowhere to wait for help - the English squadron was far away. No doubt, the Izhora sailors understood that clearly. The further should have been obvious to them - either captivity or death in case they refuse to submit the Germans’ order. There were thirty-four crew members on board the timber carrier, whose feat will forever live on in history. One will never know what was happening onboard Izhora at that moment, but the freighter continued its course and began broadcasting...

“17.25 p.m. ... People were seen at her stern gun. The weapon is pointed in our direction. The steamer gives an “RR” radiogram indicating their exact location ... ".

By order of Master Belov, the radio operator went on the air with the radio message: “gunned gunned Ijora gunned RR de UPEQ 7235 N 1050 E Ijora”. The location of the German squadron was revealed to the British forces. Thus, the shipmaster of Izhora Vasily Belov managed to warn the allies about the attack by enemy’s ships.

The unequal battle did not last long. Fearing no return fire, the destroyers fired almost point blank, that is, without a miss, but neither after 5 minutes, nor after 10, nor after half an hour Izhora, although disfigured by shells, would not sink. The radio transmission stopped, as the radio room was broken and the radio operator was killed, but now the smoke from the burning ship was visible from afar, which unmasked the Nazis. 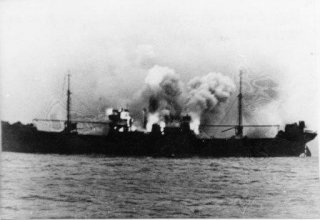 There was a severe fire on Izhora, but she was stubbornly staying afloat despite even two torpedoes fired by the enemy. The blazing Izhora, loaded with Russian timber, stubbornly kept on the surface of water. Tirpitz did not participate in the slaughter, her commander Karl Topp exclaimed: “Tirpitz does not shoot gold!” He was worried about a radio message from the Soviet steamer, sent just before her going down, as well as huge clouds of smoke and steam that rose to the sky thus giving out the whereabouts of the squadron.

The last chord of the merciless slaughter were two depth charges dropped by a German destroyer under the side of Izhora. Friedrich Ihn approached Izhora and dropped depth charges set at the minimum depth of detonation. At 6:13 p.m. Izhora went to the bottom, after heroically standing against the battleship and three destroyers for almost an hour.

The feat of Izhora, the crew of which was killed but did not surrender to the enemy, was not in vain: both convoys - PQ-12 and QP-8 - received the radiograms of the timber carrier. The radio signal was received by the British light cruiser Kenya accompanying convoy PQ-12. This fact helped the convoy to avoid encountering Tirpitz and saved it from defeat. Convoy QP-8 also survived. In addition, Izhora’s signal was also received by the British squadron of Admiral Tovey, which was hunting Tirpitz. The British sent an aircraft carrier to intercept the German squadron. Having lost the effect of surprise due to Izhora's signal, Tirpitz had to turn around and return to her base in Norway. Later, British torpedo bombers attacked the battleship, and although none of the 24 torpedoes hit the target, it was risky for Tirpitz to operate under such conditions. Never again daring to take the sea, in the end she was destroyed by the blows of British submarines and aircraft at her berth in the Norwegian fjord.

Thus, on March 7, 1942, at the cost of their lives, Russian sailors saved two convoys, which the most powerful battleship Tirpitz was purposefully going to destroy. The only surviving Izhora crewmember first officer Adayev was taken prisoner and died later in a German concentration camp.

Many years later, the famous Russian writer Valentin Pikul wrote about the feat of Izhora in his famous novel “Requiem for the PQ-17 Caravan”, bequeathing to everyone: “Remember, people, this Izhora!

List of the crew of the timber carrier Izhora: