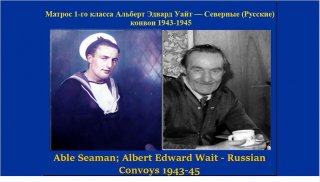 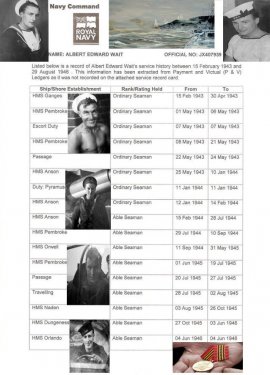 Albert volunteered to join the Royal Navy aged nearly 18yrs old. He began his training at HMS Ganges on 1st May 1943; on completion Dad joined HMS Anson on the 25th May 1943. 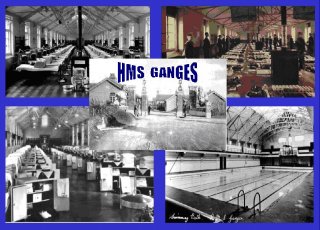 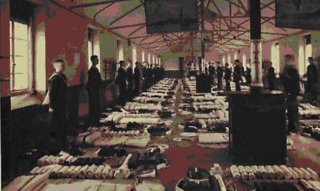 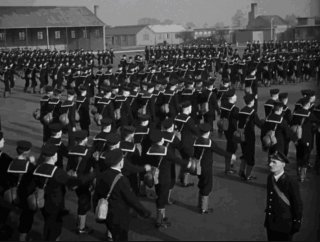 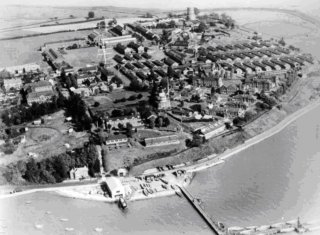 The Ordinary seamen early could expect to be on general duties. These included a varied amount of maintenance duties. Make sure the ship was literally shipshape and ready for sea. Later, our Dad was also trained to man the ‘Pom-Pom Guns’ during air attacks. The motto of HMS Anson was very fitting to the condition faced by the Sailors of the Arctic Convoys: it was Nil Desperandum ‒ Never give up Hope, don’t despair. Albert served on the Battleship HMS Anson for 14months from 25th May 1943 until July 1944. 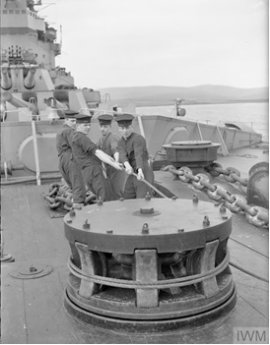 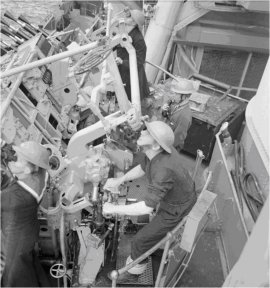 Between sailings on escort duty for many convoys HMS Anson was deployed for interception of German commerce raider, the Anson and the Home Fleet Ships were deployed from Scapa Flow. Between June 9-13th 1943 they provided cover for relief of Anglo- Norwegians at Spitzbergen.

On 27th July 1943 Dad’s ship was deployed with aircraft carriers for a diversion operation to simulate possible allied landing in southern Norway as a diversion for the invasion of Sicily.

8th September 1943: HMS Anson, with HMS Duke of York and a screen of five Home Fleet destroyers went to intercept German battleships Tirpitz and Scharnhorst which had carried out bombardment of Spitzbergen. They returned to Scapa Flow on the 9th Sept’ after the German warships reported to have returned to Altenfjord.

On the 19th November they were deployed to provide cover for the passage of Russian convoy JW54A to Kola inlet.

December: detached from RA54B and returned to Scapa Flow. 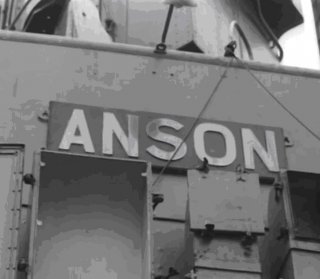 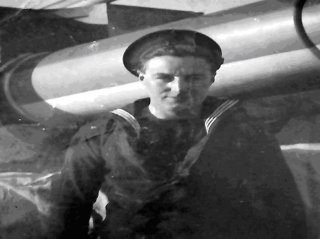 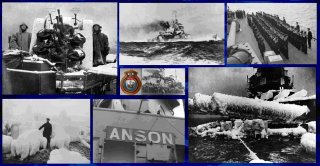 On the 21st of April sailed from Scapa Flow with Home Fleet, cruisers and destroyer screen to provide cover during further series of air strikes on Tirpitz (Operation Planet). On the 25th of April air operations postponed because of weather conditions… 26th - Tirpitz attacks cancelled in view of weather and carried out on secondary target of shipping near Bodo.

My Dad’s last passage on HMS Anson was on the 12th May 1944 Scapa Flow deployment in continuation. Deployed to provide cover for air strikes by carriers HMS Victorious and HMS Furious on Tirpitz with Home Fleet cruisers and destroyer screen. Again, this operation was cancelled and ships returned to Scapa Flow.

By July ‘44 Dad had spent 14 months on HMS Anson. Now, the Anson was due for a refit, Dad too was in need of hospital treatment, rest and recuperation: It is unclear whether our Dad was wounded in action whilst manning the Pom-Pom guns, or whether it was a freak accident during a Drill. Dad was incapacitated. As a consequence of a slight slip whilst manning the ‘Pom-Pom’ guns; he was not fast enough to avoid the full-force of the guns recoil. This broke both of his shoulders, resulting in him being out of action for quite a while. He was operated upon onboard HMS Anson, however, there was a problem with his shoulders and both had to be broken and reset again. He was sent to HMS Pembroke to receive medical attention: 29th July to 10th September 1944, this was the cause of considerable pain in later life.

However, Dad returned to duty. September 11th 1944 Dad joined HMS Orwell… My Dad would say that this was a ‘Happy Ship’ for a ship was as good as the Captain and Crew. In October 22-28th 1944, Dad returned to Russian Convoy duty, joining Russian Convoy Part of main escort for Russian convoy JW61. 28th  October: detached on arrival at Kola Inlet after successful passage without losses. 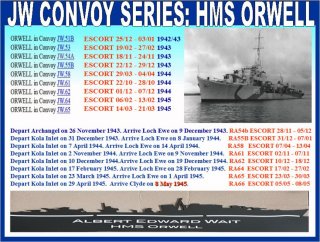 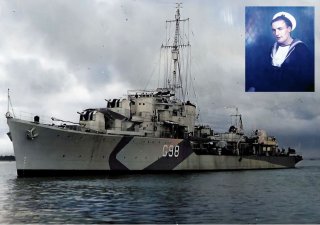 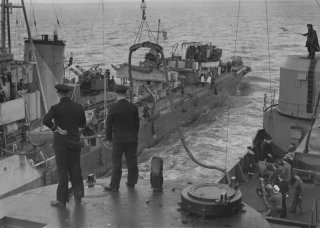 1st December 1944: HMS Orwell joined escort for Russian convoy JW62. December 7th   ‒ arrived in Kola Inlet without loss despite recent increase in available number enemy torpedo carrying aircraft.  Dad used to comment on how low the German planes came on the bombing raids. Low enough to see the pilots clearly; almost face-to-face from the other side of the Pom-Pom guns he was stationed at… Dad would have been aware that on convoy JW62 they heard the news that the Royal Air Force on the 12th  finally eliminated Tirpitz and that this threat had been replaced with a substantial force ‒ Ju88 torpedo bombers. Despite the recent increase enemy torpedo carrying aircraft they arrived in Kola Inlet unscathed. On the 10th December 1944 on board the HMS Orwell, Dad, joined the escort for return Convoy RA62, with the same ships as JW62.

On the 13th December a Swordfish aircraft L and Q from the 813 squadron from the aircraft carrier HMS Campania attacked and sunk U365 during defence of convoy RA62. There is a deeper significance to this incident than meets the eye. Dad’s last convoy leaving Russia was RA66 on the 29th  April 1945. Arriving back in Scotland and detached from RA66 on arrival in Clyde on the 8th May 1945.

Like many Sailors on return after the War, Dad seldom spoke about his time on the Russian Convoys. But, when he spoke it was mainly memories of the savage winds that appeared to cut through to your bones, Dad described the severe cold, combined with the spray from the mountainous waves caused ice to form on the ship's superstructure and deck fittings, bringing with it the fear that the ship might capsize. Dad and the crew were continuously employed in chipping ice to safeguard the ship. Accounts of the severity of the cold relate to oil being barely liquid in machinery, the mucous in the men’s nose freezing solid, for the older men with hair in the noses it was like having needles in your nostrils. One mistake of casually rubbing the nose could lead to a very painful nosebleed. Your eyelashes and eyebrow froze; your eyes were very sore with the fierce winds blowing into them. Dad also spoke of oilskins freezing solid and of men coming off watch with Ice across their shoulders frozen solid and you could hear it crack has it warmed in the lower decks. I can remember Dad telling us how you must NEVER take your gloves off or touch any rails for the hand would immediately freeze on to rail and to remove your hand was to remove a layer of skin, very painful. On returning from watch many men were unable to get out of protective clothing unaided.

One of Dad’s shipmates describes his experience on HMS Orwell thus: “The sea was violent with waves of 30ft plus. The Gale force winds cut through to your bones, we ploughed through, but in the arctic, east of Bear Island, the sea channels were very narrow we had to go east with NO deviation … The weather caused tremendous problems with fierce and unforgiving storms. The Orwell was rolling as much as 30degrees to port and starboard. The Deck was covered in treacherous ice and snow. We had to use lifelines when going aft to the guns and depth charges. These lifelines were fitted very firmly and anyone going aft on deck had to have a fixed lifeline around his body with a hook on to the lifeline and then gradually inch their way aft when the ship was steady. For when she (the Orwell) rolled over your feet left the deck and at 30degrees you were hanging above the sea. The temperature in these seas got as low as –60 degrees. At maximum roll the Orwell would shudder for a few seconds and then gradually she decided to come back – other ships did not come back. The ship would soon resemble a floating iceberg. At such times it was essential to keep the upper deck clear of ice and snow by means of axes, steam hoses, huge spanners etc or the ship would become top heavy”. 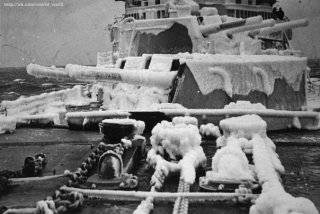 Icing of barrels of guns of the main caliber of HMS Belfast. 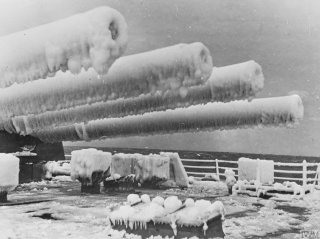 Our Dad was a quiet, a gentle man a cross between ‘Gary Cooper and Jimmy Stewart… I would like to close by paying a heartfelt tribute to our Parents; and all of the comrades who sailed upon the Russian Convoys. Dad was released anchor demobbed 29th August 1946. Following the war, Dad took various posts in engineering, driving and for most of my early years has a milkman. Mam and Dad had five of us, four sons, and, one daughter (David, Vivienne, Gregory, Adrian and Christopher). In later life Dad, suffered severely with rheumatoid arthritis. He died of a sudden heart attack at only 63 years of age it was a terrible shock. A Light in our lives was extinguished. He had always been on the go and seemed fitter than most of us. Like his doctor said at the time, I think much of this could be put down to the rigours and cold of his wartime service. 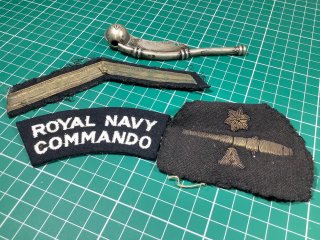 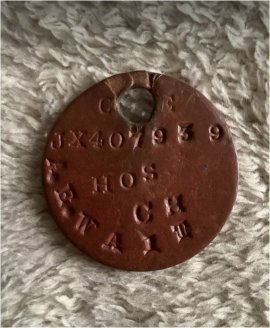 In 2013, I developed a Facebook Group to Honour our Dad, and Mam, to learn more and share more information about these Forgotten men. Hence the title of our group: Arctic Convoys – Forgotten Heroes. This was a small family group, until I began to receive many requests to join the group – we opened it up to the world… never thinking that it would now have over One thousand and One Hundred members, from all corners of the world. The greatest honour of this group is that there are veterans who occasional share their story and with such stories we seek to inform and raise awareness of these heroic men – no longer forgotten heroes, but honoured in a way so long overdue. 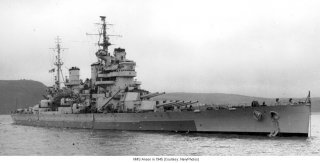 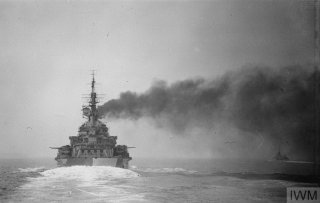 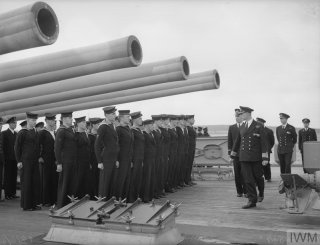 The Captain of the Anson inspecting the Stokers' Division under the 14" guns of "A" turret. Imperial War Museums.

A King George V-class battleship of the Royal Navy, named after Admiral George Anson. She was built by Swan Hunter and Wigham Richardson Shipyard and launched on 24 February 1940, being completed on 22 June 1942. After her commissioning in 1942, Anson was sent to the Arctic Sea with most of the Home Fleet as an escort ship for Russian convoys. 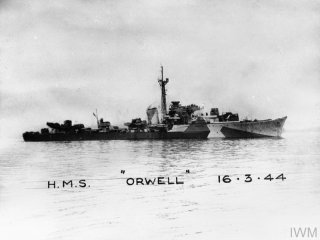 HMS Orwell was an O-class destroyer of the Royal Navy that entered service in 1942 and was broken up in 1965. The ship was launched on 2nd April 1942 and was completed on 17th October that year. This ship was fitted for use as a minelayer if required. Orwell saw action at the Battle of the Barents Sea, and was involved in convoy escort duties during the Battle of North Cape. 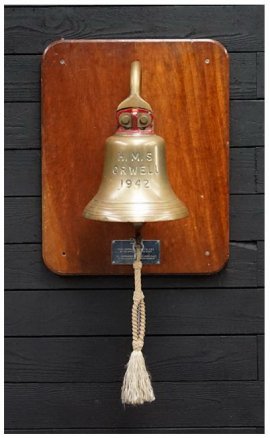 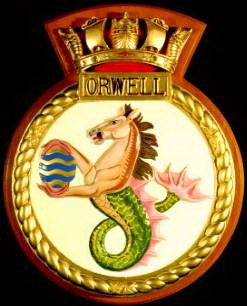