Defeat of the German battleship Tirpitz 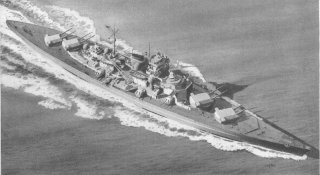 On November 12, 1944, the flagship of the Nazi fleet, giant battleship Tirpitz was sunk by the British warplanes off the coast of Norway. The Allies hunted him for two and a half years, making countless attempts before a successful attack. The destruction of the giant battleship has given the allied fleet the needed freedom of action in the North Atlantic and Arctic Ocean.

The Bismarck-class cruisers were built in German shipyards in 1939, had extraordinarily powerful armor and were the pride of the German navy. The Nazis managed to build only two such super ships: Bismarck, named after the first chancellor of the German Empire, and Tirpitz, named after the founder of the contemporary German fleet. These were the largest warships ever built in Germany. Their guns were superior to the combat equipment of the ships of the Allied countries in the anti-Hitler coalition.

The legendary battleship was literally a floating fortress with a team of 2,5 thousand people, the total air defense armament of 84 barrels, and the side armor reaching 15 inches, having at that time no analogues in the world. It was able to withstand a bomb strike of any power and protect the ship from air strikes. The achievement of the Nazis’ optical industry was a high-quality rangefinder capable of measuring distances up to 100 km.

In January 1942, Tirpitz left her home port and sailed into Norwegian waters to locate the Northern allied convoys and militate against the British commando operation on Vagsøy Island. The corresponding decision was made personally by Hitler at a meeting with the commander-in-chief of the Kriegsmarine Erich Raeder, the chief of the Wehrmacht high command Wilhelm Keitel and the head of staff Alfred Jodl.

It should be noted that Tirpitz had barely took part in sea battles. In fact, she did not fire a single shot at the enemy ships, all the while staying at various bases in Norway, forcing the Allies to keep a large fleet in the area just in case Tirpitz went into battle. Due to initial purpose of constructing this type of battleship and to the way Tirpitz was exploited during the war, the Norwegians nicknamed her "Lonely Queen of the North" (Norw. Den ensomme Nordens Dronning).

During the war years, Soviet and British pilots made 700 sorties to the Tirpitz berthing locations. The Nazi battleship pinned the Home Fleet in the North Atlantic for three years, forcing the British to keep squadrons of battleships, aircraft carriers and cruisers not far from the Norwegian fjords. Submarine units were looking for Tirpitz; aviation was hunting her. The Nazi monster survived the mini-submarine attack, and was at last destroyed by 5-ton bombs in her berth in Tromsø in 1944.

Ill.: Tirpitz returns to naval base after interception of convoy PQ-17.

It was because of Tirpitz that the convoy PQ-17 received the fatal order to "scatter", which led to its almost complete destruction. In July 1942, the Nazi commanders planned to use Tirpitz together with the battleship Admiral Scheer, heavy cruiser Admiral Hipper and destroyers to attack the convoy (plan “Rösselsprung”). Due to delays in permission to start the operation (given personally by Hitler), the sortie took place only on July 5. By that moment it became known that the convoy had already been ordered to “scatter” and Tirpitz turned back. Thus, Tirpitz did not directly cause any damage to the convoy, however, PQ-17 separated and was left unguarded precisely because of the threat of legendary battleship. As a result, 22 transports with a total tonnage of more than 142 thousand tons were sunk by U-boats and enemy’s aircraft. 210 aircraft, 430 tanks, 3350 vehicles and 99 316 tons of other strategic cargo went to the bottom.

In September 1943, the British carried out the first successful operation against Tirpitz. X class mini-submarines were chosen for the attack. Most of the way, mini-boats were towed by conventional submarines. Of the six midget submarines, three were to attack Tirpitz: X5 (Lt. Henty Creer), X6 (Lt. Donald Cameron) and X7 (Lt. Basil Place). X5 was spotted and sunk, but X6 and X7 dropped four 2-ton mines under the battleship, after which they were also revealed, and their crews were taken prisoner. Nevertheless, Tirpitz did not have time to leave the berthing place before the explosion of mines and received serious damage. As the result the battleship was out of action for six months, its maximum speed significantly decreased.

The British command feared that the repaired battleship would once again threaten the strategically important Northern convoys. In addition, the destruction of the battleship would free up several heavy warships stationed in the North Sea to counter Tirpitz. The British Home Fleet had been preparing for the operation for four months. On April 3, 1944, warplanes took off from five aircraft carriers and attacked Tirpitz. British pilots met serious resistance from the enemy: British losses amounted to four aircraft, nine pilots were killed. Fifteen bombs hit the battleship, machine-gun fire from planes inflicted heavy loses to the gun crews.

The damage caused to Tirpitz was not enough to destroy the battleship or permanently disable it, but 122 German sailors were killed, 316 were wounded. The Nazis decided to repair the ship, and the work was completed by mid-July. From April to August 1944, the UK forces conducted several carrier-based aircraft raids, of which none were successful.

Destruction of the battleship Tirpitz

On September 15, 1944, Operation Paravane was launched by the Royal Air Force of Great Britain from Yagodnik airfield near Arkhangelsk. Despite the smokescreen set up to protect Tirpitz, one of the bombs hit the bow of the ship, causing damage that made it virtually unseaworthy. The Nazis in fact had no opportunity to put Tirpitz in dry dock for repairs, so in October the battleship was transferred to Tromsø as a “heavy artillery floating battery” in case of an expected allied invasion of Norway. Still, the British continued their attacks on Tirpitz, unaware of the decision not to restore the ship.

On November 12, 1944 Tirpitz was sunk near the city of Tromsø as a result of Operation Catechism. Three Tallboy air bombs hit the target; one bounced off the armor, but the other two punctured the defenses and punched a roughly 60-meter hole in the ship's port side, causing a fire and subsequent explosion in the powder room.

Tirpitz fell aboard, then capsized, and about ten minutes after the attack sank west of Tromsø.

950 people became victims of the bombing and sinking of the ship, including the battleship captain Robert Weber. Approximately 750 sailors managed to escape. The counter fire of German air defense damaged only one aircraft.

The destruction of Tirpitz eliminated the last major surface threat to allied communications in the North Atlantic and the Arctic Ocean. This made possible to transfer the main sea forces of the British fleet (i.e. fleet aircraft carriers, high-speed light aircraft carriers, battleships and the battle cruiser “Renown”) from the Atlantic theater of operations, where they were located as "deterrent forces" - to the Indian and Pacific oceans for combat operations against Japan. 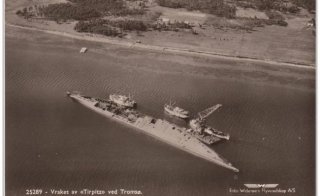 After the war, pieces of wreckage of Tirpitz were sold out and separated on site by a Norwegian company. Almost the entire ship was cut up and removed. However, much of the Tirpitz's bow remains where it sank in 1944. In addition, the ship's power generators were used as a temporary power plant, supplying electricity to the fishing industry around Honningsvåg (Norway).