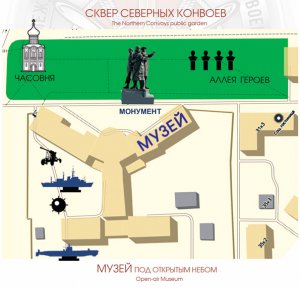 The world’s largest Museum devoted to the history of Northern convoys will become a powerful factor bringing together all the people and countries of the world who cherish the memory of War heroes and recognize the high price at which the piece was achieved.

Special emphasis in compiling the Museum’s exposition will be made on the lives of the convoys’ participants from different countries. The stands will be dedicated to each country that took part in the convoys and will feature artifacts, photographs and documents of the participants, their memories.

Exposition halls are planned to be made using modern technologies for their interactive use and perception. The exposition will include dioramas with dynamic interactive elements. The combination of the classical museum presentation of the material with the achievements of IT-technologies will make the experience of visiting Museum enjoyable and memorable for both the older generation and the youth.

For the moment more than 400 exhibits have been received and formalized (these are mostly personal belonging of the convoys’ veterans from Russia and abroad donated to the Museum by their families).

The exposition of Memorial Museum of the Northern Convoys History is scheduled to be partly opened for visitors on August 31, 2021.

The Public Garden will be located in front of the College of Admiral Makarov State University of Maritime and Inland Shipping and will include:

The Chapel in honor of the convoys’ participants

As a part of the Memorial Complex, it is proposed to erect a chapel in memory of both military and civilian participants of that important and in many ways tragic page of the Second World War. Thousands of seamen, pilots, coast guard fighters from different countries sacrificed their lives so that the common enemy - Nazism - would be crushed. The erection of the chapel will be another significant step in honoring those who died in those days in the harsh northern latitudes and now living veterans.

The latter will be located on the surrounding grounds and constitute an essential part of the Memorial Complex. The exhibition will include large artifacts pertaining to the convoys such as fragments of weapons and equipment, a genuine motor boat, submarine and a minesweeper of the WWII. It is planned to provide history- and ship minded schoolchildren, students and cadets an opportunity to participate in restoration and taking care of the exhibits.

One of the primary objectives of the Northern Convoys International Centre is to search for all now living veterans – participants of the Northern convoys – and to conduct shooting-interviews with each of them. All interviews will be presented both in Russian and in English. On the basis of the materials received, a documentary film will be created about the feat of not only sailors, pilots, the coast guard, but also the civilian people who took part in those memorable events.

The Conference is scheduled to be held on August 31, 2021 to commemorate the 80th anniversary of the Operation Dervish and shall be the first international conference to welcome the delegations of all the twelve countries that took part in the Northern convoys. It will be organized and held in partnership with Admiral Makarov State University of Maritime and Inland Shipping. The Convoys’ veterans and their families from around the world, historians, researchers, representatives of public organizations involved in the history of the Second World War are planned to be asked for participation. We are working on the creation of a teleconference between countries and cities whose residents took part in the convoys.