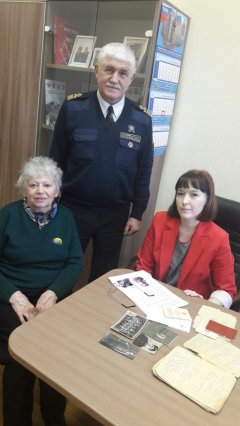 “26-5-42. At 2 a.m. the convoy was attacked by enemy’s u-boats and aircrafts. One of the steamers was torpedoed and went down (in 2 minutes). The aerial spy keeps on following the convoy. The officers and crew are on the constant defense alert. Four cruisers and several destroyers left the convoy…”

The unique diary kept by the Northern convoy’s participant Ivan Bobrov from January 4th till May 30th 1942 has been recently added to the funds of the future Memorial Museum of the Northern Convoy’s History.

This most valuable artifact together with other documents and photographs of Ivan Bobrov was donated to the Museum by his daughter, Valentina. She had the idea of immortalizing the memory of her father by donating his personal belongings and photos to a museum for quite a long time. Having learnt from the Internet that Memorial Museum dedicated to the Northern convoys is being created in St. Petersburg, Valentina got in touch with us over the phone. Our meeting took place in the end of February.

Ivan Bobrov was born in Tver Region of the former Russian Empire in 1906. As an officer on the steamship “Revolutsioner” he took part in convoys PQ-8, PQ-9, PQ-15, PQ-16. By the end of war Ivan Bobrov held the rank of captain and was awarded Order of the Patriotic War of the 2nd class, Order of the Red Star, Medal for Combat Service, Medal for Victory over Germany and some others.

We thank Valentina Chegodayeva for donating documents and artifacts and would appreciate further cooperation.