On January 31, 2020 at the College of Admiral Makarov State University took place an event on the occasion of the visit paid by Scottish delegation as part of the annual festival "Days of Scotland in St. Petersburg." The event was organized by the Northern Convoys International Centre and the Admiral Makarov State University of Maritime and Inland Shipping. The festival was being held in our city for the 49th time. In the days of the festival the representatives of Scotland traditionally visit memorial complexes and museums of St. Petersburg, and also meet with schoolchildren and students. 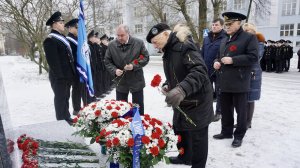 This year guests from Scotland were welcomed in the College of Admiral Makarov State University, the program of their visit included laying flowers in front of the Arctic Convoy Monument, meeting with cadets in the events hall of the College and visiting the Northern Convoys Memorial Hall. The sincere interest of foreign guests in the Northern convoys of 1941-1945 is due to the fact that many people both in Scotland and in the UK cherish the memory of participants of WWII and their heroic deeds.

It is also important that the Scottish port of Loch-Ewe was one of the major locations in the collecting of Allied convoys. During the four years of war, 481 transport vessels had left its rocky shores in the direction of Russia, 104 of them were sunk by the enemy. Among the guests of the College on January 31st were also members of families of those Soviet veterans of the Great Patriotic War whose memorabilia are exhibited in the Northern Convoys Memorial Hall.

In the events hall of the College the guests and the cadets were greeted by Pavel Ozhgikhin, Chairman of the Board of Trustees of the “NCIC” Foundation, Natalya Teltevskaya, temporarily in charge of Vice-Rector on cooperation with subsidiaries and international activity of Admiral Makarov State University and Yury Alexandrov, President of St. Petersburg Regional Organization “Polar Convoy”.

In response, the chairmen of the “St. Petersburg Forum” public organization (Paisley, Scotland) Tom and Elizabeth Clark expressed their gratitude for the invitation to the maritime college. Tom Clark read out a greeting from the Provost of South Lancashire, the area where many of the Scotland guests came from, and also noted how important it was during the war for people of Great Britain to realize that their country and the Soviet Union were fighting together against the common enemy. 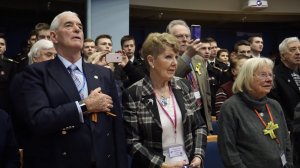 The central happening of the whole event was the act of donating triptych by famous Scottish artist Diana Mackie to the Memorial Museum of the Northern Convoys History that is being created in St. Petersburg by the “NCIC” Foundation.

The triptych presented by Ms. Mackie consists of the paintings “Clouds Clearing”, “Moon Rising”, “Spirit of the Albatross” and is dedicated by its author to the Northern convoys and the memory of all who took part and their families. The artist herself presented the paintings and told about each of them. 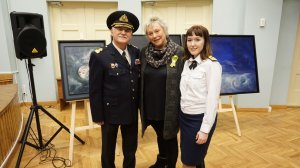 The symbolism of the triptych is connected, first of all, with the Moon as the eternal presence, silent witness to our tragedies and joys, to wars and victories, our ability to learn and remember. According to the artist, while working on the triptych, her thoughts were not only with sailors who participated and sacrificed their lives in the legendary Northern convoys, but also with the inhabitants of besieged Leningrad, who showed unparalleled courage and endurance.

Diana Mackie and director of the Northern Convoys International Centre Vladimir Solomonov exchanged signed agreements on donating the triptych to the Museum. 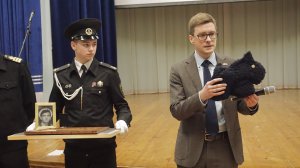 Another important event during the meeting with Scottish guests was donating to Memorial Museum personal belongings of a Northern convoy veteran, 1st class sailor Charles Brody. During the convoys he served on the lightweight cruiser HMS “Royalist”, which was protecting the passage of the Northern convoys in 1944. The items were handed over by Timofey Kunitsky, representative of the Russian Ministry of Foreign Affairs, who worked for several years as vice-consul of the Consulate General in Edinburgh. 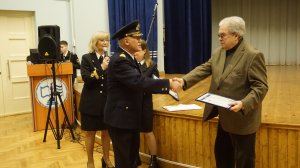 Among the family relics donated to the Museum by Charles Brody’s son is a portrait photograph of veteran, a humorous "certificate" that was granted to him as a part of tradition to celebrate the intersection of the Arctic Circle, the Arctic Star medal, and the “Scottie” toy dog that Charles Brody made while serving on HMS “Royalist”.  Such “Scotties” were made by British sailors from improvised materials following the unwritten tradition.

College cadets sang for Scottish guests songs about convoys, traditional songs of Russian and Scottish sailors, and also performed the legendary “Katyusha” and the cheerful sea dance “Yablochko”. The guests of the College expressed deep gratitude to the cadets and organizers of the event for the warm welcome and friendly atmosphere.

We are confident that today, in the year of 75th anniversary of the Great Victory and the end of the WWII, on the eve of the 80th anniversary of the first Allied convoy in 2021, such meetings are very important for they can promote cooperation between the member countries of the legendary Northern convoys and show the continuity of generations in commemorating heroes of those crucial events in the history of not only each of these countries, but the whole world.

We thank the St. Petersburg Association for International Cooperation for the assistance in organizing the event.

We thank the marketing and public relations department of Admiral Makarov State University of Maritime and Inland Shipping for providing photographs.