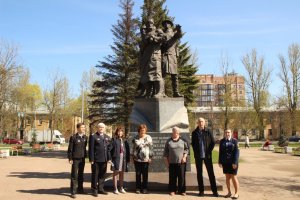 On April 30, 2019, the team of the International Center received guests from New Zealand at the Northern convoys Memorial Hall in College of Admiral Makarov State University. Judith Phillips and Frieda Looser were on a tourist trip in St. Petersburg when they made inquiries about the city’s museums dedicated to the Northern convoys of 1941-1945. Our guests’ sincere interest in the Allied convoys was not only due to the fact that many people in New Zealand cherish the memory of the WWII but also because Judith's father, John Phillips, took part in the convoys. In 1995 he received the Soviet Jubilee Medallion, struck in 1985 to commemorate the 40th anniversary of the end of WWII. The presentation was made by Yuri Sokolov, the Soviet Ambassador to New Zealand. 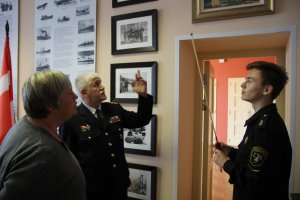 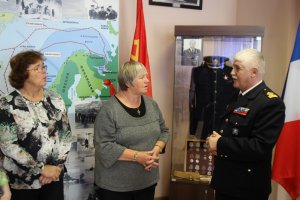 College cadets conducted an excursion for the guests, and Judith Phillips gave us biographical notes on her father, which are partly published in The Heroes of the Northern convoys site section. The guests expressed gratitude to the Northern Convoys International Centre and the Admiral Makarov University for the efforts made to create Memorial Museum of the Northern Convoys History in Russia.

Our communication with Judith Phillips and Frieda Looser continues: just recently they have sent us short biographical information about another New Zealander who took part in the Northern convoys – William Williams, the father of a longtime friend of Frieda.

Besides, Frieda Looser has kindly proposed us her assistance in finding contacts of other convoys’ veterans from New Zealand and their families. The Northern Convoys International Centre gratefully accepts this proposal and expresses deep confidence that by joining efforts we shall gain success in establishing cooperation with New Zealand on the theme of Northern convoys.