The award sheet of the Northern convoys’ participant Thomas J. Messore was donated to the collection of Memorial Museum of the Northern Convoys History. A letter from the United States with the original document came to the address of the International Centre. The award sheet of November 3, 1944 gave Thomas J. Messore the right to wear an award ribbon for participating in the U.S. military campaigns in World War II. As a separate attachment was sent a copy of document issued in 1944 and certifying that Thomas J. Messore made two trips to Russia from 1943 to 1944 as a member of the Armed Guard Gun Crew of the merchant ship M.V. Norlys.

Most likely, the M.V. Norlys sailed under the Panamanian flag and, at least twice, was part of the convoy to the Kola Peninsula in November 1943 (convoy JW 54A) and to Arkhangelsk in December 1943 (convoy JW 55B) and back as part of the return convoys to Loch Ewe in Scotland. The vessel, therefore, took part in the delivery of goods for Russia as the part of lend-lease supplies.

The International Center expresses sincere gratitude to the veteran and his family for their contribution to the creation of the Museum and the formation of its collection! We will be delighted to have the opportunity to learn more about Thomas J. Messore, his service in the Northern Convoys, and his memories of Russia. 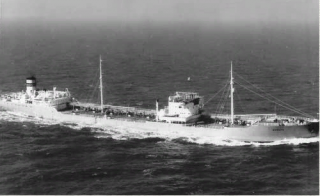 United States Navy Armed Guard units were established during World War II. The purpose of the guard was to man the deck guns of merchant ships to provide a nominal defense against attack. This was to counter the constant danger presented by enemy submarines, surface raiders, fighter aircraft and bombers. There was a shortage of escort vessels to provide the merchant vessels with adequate protection.

Armed Guard crews served on Allied merchant marine ships in every theatre of the war. Typically the crew was led by a single commissioned officer, but earlier in the war chiefs and even petty officers had command.

The assignment as an Armed Guardsman was often dreaded because of the constant danger. Merchant ships were slow, unwieldy, and priority targets of submarines and planes. Furthermore, merchant ships were among the last to receive updated equipment. Early on in the war, some ships only had a few machine guns, so the crews painted telephone poles to imitate the barrels of larger guns.

When practicable, the Navy Armed Guard aboard a merchant ship would provide cross-training to merchant crew members in the use of the guns in the event the Navy personnel were killed or injured. The Navy Armed Guardsmen would typically sail round trip on the same ship, occasionally they would get a different assignment upon reaching their destination depending on convoy schedules.