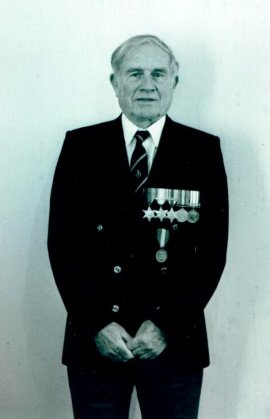 Liam Ahern was born in Queenstown (as it then was) in 1920 and went to school in Cobh and in Portsmouth, where his father was posted in the 1930s. In 1936 he joined the Royal Navy in Chatham (just after his 16th birthday) as an ERA (Engine Room Artificer) apprentice and completed most of his training on HMS Caledonia located in Rosyth, after which he was posted to sea.

HMS Caledonia began her life at Blohm and Voss, Hamburg in 1913; named the Bismarck, she was designed to be the largest liner ever built but was transferred to Britain in 1919 under the Treaty of Versailles as reparation for the sinking of the Lusitania. Completed by late March 1922, she operated as the White Star liner Majestic until she was sold in May 1936 to a ship breaker's yard. She was bought by the Admiralty shortly afterwards (at which time the only larger vessels afloat were The Queen Mary and the Normandie) and converted to a training ship. She arrived in Rosyth on 10 April 1937 to be commissioned as the 9th HMS Caledonia on 23 April 1937 for the purpose of training Boy Seamen and Artificer Apprentices. In 1939, at the outbreak of war, she moved out of the non-tidal basin to anchor off Crombie Point. Her intended future use as a troopship was not to be, as she burnt to the waterline on 29 September 1939. She was later towed to Inverkeithing in 1941 where she was finally scrapped in 1943. 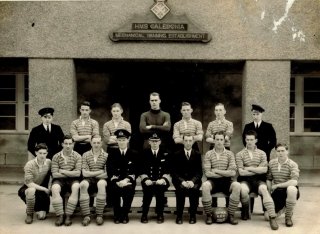 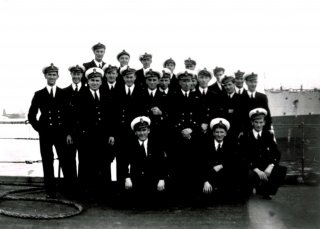 Throughout the second world war Liam Ahern served on several ships of the Royal Navy including HMS Ajax in the Mediterranean (during the Battle of Cape Matapan, Greece: 27 to 29 March 1941; 08 February 1942: ERA Liam Ahern RN promoted to Chief Petty Officer ERA, HMS Ajax) and on the destroyer HMS Walker engaged on convoy escort duties in the Atlantic, in the North Sea, on the Arctic Convoys, and in operations towing the innovative, prefabricated Mulberry Harbours to the Normandy beaches, including the provision of oil supply lines to reinforce the Allied D-Day invasion foothold in June 1944. Following the surrender of Nazi Germany in May 1945, Chief Petty Officer ERA Ahern was deployed to the Far East and served on ships of the British Pacific fleet. 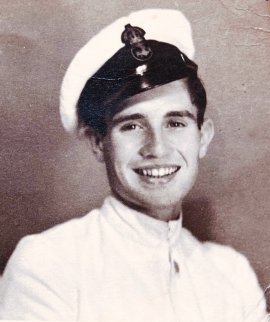 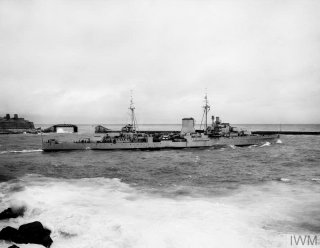 At the outbreak of the war, the Irish government established the Marine and Coastwatching Service and acquired six motor torpedo boats from Britain. By the end of the war the marine service had been run down and two years later, it was decided to establish an Irish Naval Service as part of the Defence Forces. In 1946 a permanent Naval Service was established in Ireland and three flower class corvettes, L.É Macha (formerly known as H.M.S. Borage), L.É Maev (formerly H.M.S. Oxlip) and L.É Cliona (formerly H.M.S. Bellworth) were purchased from the British Admiralty and became the backbone of the Naval Service for the following two decades.

Chief Petty Officer ERA Liam Ahern RN was one of two junior officers recruited from the Royal Navy, and was one of only a handful of officers in the infant Irish Naval Service who had naval combat experience as most of his fellow officers were recruited from the merchant marine.  In 1947 the majority of the new intake of 23 cadets were sent for training to the Britannia Royal Naval College, Dartmouth.

Sub Lieutenant Ahern NS (Naval Service) was subsequently posted to the flower class corvettes L.É. Macha and L.É. Maev, becoming a lieutenant commander in 1956, and a commander in 1968, before moving to the dockyard engineering service and retiring in 1980 as the senior marine engineering officer at the naval base & dockyard at Haulbowline. Commander Ahern rarely referred to his experiences and training in the Royal Navy, when serving at the Naval headquarters on Haulbowline island. 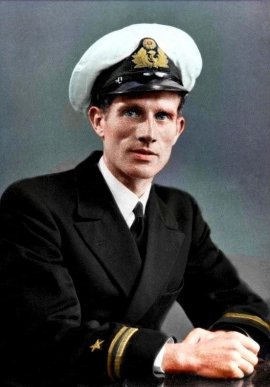 Following his retirement in September 1980 Commander Ahern worked with Irish Shipping for a further five years at the Verolme Cork Dockyard. He had also been closely involved in the design and commissioning of the Naval Service's helicopter patrol vessel L.É. Eithne, its largest vessel, built and launched in 1984.

In recent years, following the death of his wife Sally (Sarah, née Whelan), he was cared for by his family and the staff at the Conna Nursing Home in north Cork as he coped with failing eyesight. Liam Ahern was predeceased also by his eldest son, Peter. He is survived by his daughters, Anne Marie (Bermingham) and Miriam, son Damian, and seven grandchildren. Commander Ahern died on the 09th March 2011 and is buried  in St Colman’s Catholic Cemetery Cobh, County Cork, Ireland.

When he retired Commander Ahern was presented with medals by the government of Malta for service on the battle cruiser HMS Ajax and by the Soviet Union in recognition of his services on the Arctic supply convoys to Murmansk and Archangel from 1941. He recalled, on the evening before his 21st birthday, his ship had been attacked by German dive-bombers off the Norwegian coast and, knowing that his position in the mid-ship engine room was a likely target, Liam feared that he would never attain his majority. He was fortunate in that he survived nearly a dozen Russian convoy trips without being sunk or getting his feet wet once. 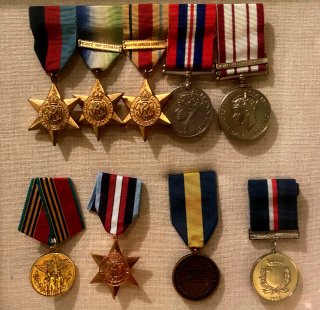 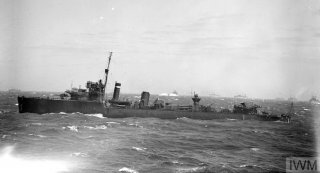 W-class destroyer of the British Royal Navy, was laid down by William Denny and Brothers at Dumbarton, Scotland. She was launched on 29 November, completed on 12 February 1918. She took part in in World War I and World War II (starting from 1939). In January 1944, Walker was transferred to the Home Fleet to escort Arctic convoys to and from the Soviet Union.

During the post-war period of his life and career, Liam Ahern served on the corvettes L.É Maha (formerly known as HMS Borage) and L.É Maev (formerly HMS Oxlip) of the Irish Naval Service. Notably, both corvettes were part of the Northern Convoys to Russia in the Royal Navy during the World War II. Their history is also noteworthy because it was these corvettes, together with the corvette L.É Cliona, that became the backbone of the Naval Service for the following two decades (until the 1970s). In the 1960s on the corvettes L.É Macha and L.É Maev served Peter Mulvany, a researcher of Irish participation in World War II, due to whose assistance the Northern Convoys International Centre is now able to expand knowledge and archive on the Irishmen in the Northern Convoys 1941-1945. 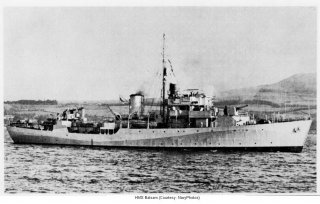 Oxlip was ordered in July 1939 as part of the Royal Navy's 1939 War Emergency building programme. She was launched in August 1942, and served on the Arctic convoys during World War II.

From February 1942 onwards Oxlip served with close escort groups on Arctic convoys. In three years Oxlip sailed with 18 convoys (outbound and homebound), contributing to the safe and timely arrival of more than 300 merchant ships. In 1946 she was sold for the Irish Naval Service where she  was named after Medb, the legendary queen of Connacht. L.É Maev was and decommissioned in March 1972. 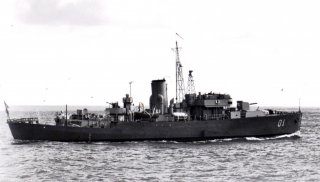 L.É. Macha  at sea on her way to Gibraltar, 1948: Credit: Irish Military Archives.

Flower-class corvette, ordered in 1939 as part of the Royal Navy's 1939 War Emergency building programme. She was launched in November 1941 and completed in April 1942. In December 1943 she was part of the close escort to convoy JW55B, which was subject to a failed attack resulting in the sinking of the German battleship Scharnhorst. In 1946 HMS Borage was sold to the Irish Naval Service where she was commissioned as LÉ Macha (named after Macha, an ancient Irish goddess of war). She was scrapped in November 1970.

Information and materials provided by Commander Liam Ahern's son Damian Ahern and Peter Mulvany, the researcher of participation of the Irishmen in the World War II