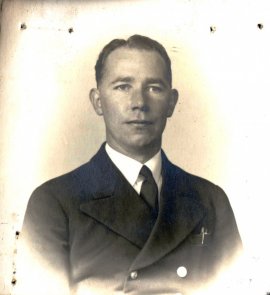 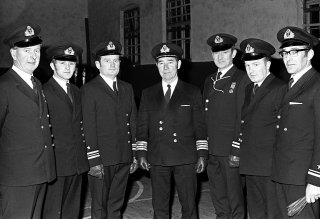 Was born in Dublin, Ireland. His career began in 1937 when, following a pre-sea course at the Irish Nautical College, he joined the Cardiff based Reardon-Smith Line engaged in worldwide trading.

In March 1942 Peter Kavanagh sailed to Murmansk with convoy PQ 13 aboard the cargo ship New Westminster City as third officer. New Westminster City was attacked by enemy aircraft and sank in the port of Murmansk on April 3, 1942. Following the sinking of his ship in Murmansk port third officer Peter Kavanagh transferred to the Empire Starlight, but she was severely damaged during an air-raid a few hours later. For the passage home to the UK, Kavanagh was assigned to the SS Harpalion. On the 13 April 1942 off the North Cape, the SS Harpalion was sunk by an aerial torpedo and he was rescued by a lifeboat from HMS Fury. Months later Third officer Kavanagh received a communication from 10 Downing Street which read: 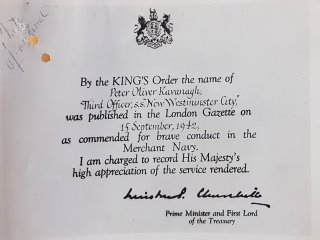 "By the King’s Order the name of Peter Kavanagh, Third Officer, SS New Westminster City was published in the London Gazette on 15 September 1942 as commended for brave conduct in the Merchant Navy. I am charged to record His Majesty’s high appreciation of the service rendered." Winston Churchill, Prime Minister

His actions as part of the New Westminster City crew were also mentioned in the report of the surviving senior officers from the same ship. 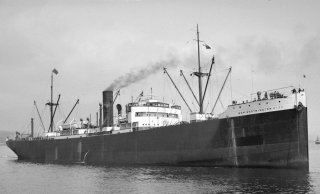 Crew during the war: 44 merchant sailors and 6 armed guards

Sunk: April 4, 1942 in Murmansk during a Luftwaffe raid. 2 crewmembers killed.