Home / International Centre / The International Virtual Exhibition «One Equal Temper of Heroic Hearts...» / Theme of the Northern Convoys in the works of foreign artists / Jim Ray

Watercolors by British artist Jim Ray, created especially for the exhibition "The Northern Convoys. From Sailor to Admiral" (2021) held by Arkhangelsk Museum of Local Lore and dedicated to the 80th anniversary of the arrival in Arkhangelsk of the first Allied convoy "Dervish".

Jim Ray dedicated his series of watercolors to the sinking of the inland Soviet convoy BD-5, one of the worst tragedies at sea during World War II in the Polar region. 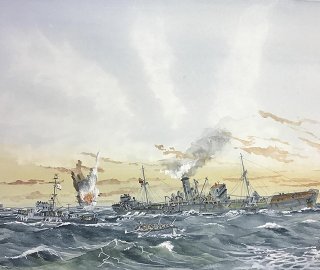 The convoy BD-5 consisted of 4 ships - the merchant ship Marina Raskova carrying passengers including children and women, and three escort minesweepers. The convoy left the port of Arkhangelsk on 8 August, 1944. Four days later, on 12 August, 1944 in the Kara Sea, Marina Raskova was attacked by the German submarine U-365.

The artwork (right to left) shows the sinking of the Marina Raskova, (a former American cargo and passenger ship Ironclad that participated in the PQ-17 convoy in July 1942); the minesweeper T-118, which had just been torpedoed. 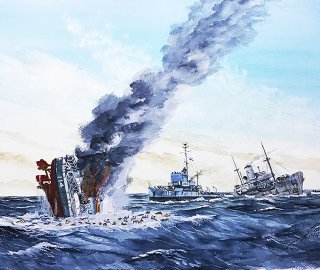 The minesweeper T-114 went underwater vertically in four minutes. And all the passengers rescued from the Marina Raskova (200 people, including 136 women and 20 children) died instantly. No one was saved. 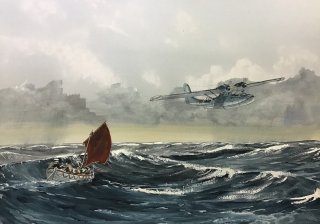 The artwork shows a kungas-type rescue boat with passengers rescued from the merchant Marina Raskova, drifting during a storm in the Kara Sea in August 1944. A Catalina-type aircraft is circling above the boat. The pilot, who discovered the kungas only on the 18th day, unsuccessfully tries to drop food and water into the boat.