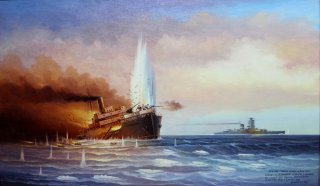 The feat of the steamship Aleksander Sibiryakov

On August 25th, 1942 the unequal battle between the icebreaker Aleksander Sibiryakov and the German heavy cruiser Admiral Scheer took place, resulting in the loss of the Soviet ship.

Sibiryakov met in the area of Belukha Island with a cruiser conducting a raiding operation Wunderland. Despite the obvious weaker armament the Sibiryakov took the fight, in which she was sunk by artillery fire of 280 mm German guns. Before her imminent destruction the steamer managed to "light up" the German raider on the radio and deprived her of her main advantage for further operations in northern waters.

From the very beginning the sailors and passengers of the icebreaker were well aware that they had no chance against the most powerful cruiser. The courage displayed in the minutes of the last battle became the real example of unbreakable fortitude of the Soviet seamen, and the ship itself deserved the high name of the "Polar Varyag".